Coming soon, The tale of the Hunchback of Rochfortbridge
as told by Mr Alford from Wales, yet another Rochfortbridge Exile.
Many Rochfortbridge Exiles have contacted this site and require information on families or friends still living in the area.
no personal information will be given to the requesters without the permission of the families involved.
please help the exiles by co-operating with their derth of knowledge and allow us to give them back the family their fore Fathers reluctantly left behind.
*********
I was delighted to make contact with someone from the beautiful country of Lebanon, a country that holds many fervent memories and has a special place in my heart. This unspoiled land has its beauty and majesty mentioned in the Bible and the cedars of Lebanon and spectacular views of Mount Lebanon and the Golan Heights are indeed breathtaking. This Biblical and beautiful land even though it has had it share of troubles is the home of a Rochfortbridge girl who has shared her memories with us.
With special thanks to Bríd

One night as Festus Conroy of Murvey, Galway, lay dying, he called out to his son for water. After a brief exchange about nothing in particular, the dying man abruptly asked that he be buried in Gorteen Cemetery, Galway. The last thoughts of Festus Conroy, like those of many of the Wild Geese of Ireland, were of going home. 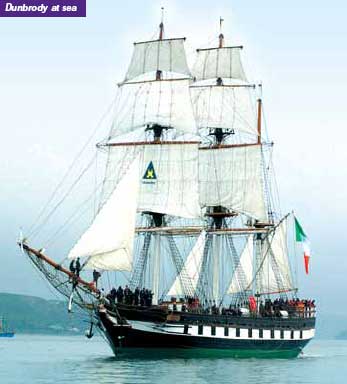 The term "Wild Geese" to many brings to mind the flight of Canadian Geese, their long necks extended, flying in a V formation at the close of an autumn day. But to the Irish, "Wild Geese" are the young men of Ireland who left their native land for service in the armies of Europe and America and, by extension, the Wild Geese are all of the men and women who have left and will leave Ireland for that which they cannot achieve at home.
The first of the Wild Geese took flight after the Battle of the Boyne. In the late 1600's the Irish supported King James II, Catholic King of England, in his losing struggle with William of Orange. Allied with James and the Irish was the Catholic King of France, Louis XIV, who had promised to send aid to Ireland to help James stave off the powerful Orangemen. Before the aid arrived, James was defeated at the Battle of the Boyne on July 12, 1690. James fled to France.
The Irish forces under Patrick Sarsfield continued the Jacobite war for another year, but after losing their stronghold at Limerick on October 3, 1691, the Irish forces surrendered. The rules of warfare being different in those days, the victorious William gave Sarsfield the choice of returning-to his lands in Ulster and swearing allegiance to Parliament and the new king, or taking his army and leaving Ireland forever. He departed Ireland with 10,000 soldiers for service in France. The flight of the Wild Geese had begun. For the next hundred years, until the French Revolution, the Wild Geese and their descendants served France as the Irish Brigade. Fighting on a foreign battle field, Sarsfield was killed two years after his flight, his dying words setting the theme of the Wild Geese, "Oh, that this were for Ireland."
The Wild Geese served not only in the French army but also in the Spanish, Austrian, English, and even Russian armies. The O'Rourkes are a case in point. After the defeat of James, Owen O'Rourke emigrated to France to rise to the rank of Viscount and Baron of Breffny. Count John O'Rourke was created a peer of France by Louis XV. Cornelius settled in Russia where his son General Count Joseph Kornilievitch O'Rourke distinguished himself as one of the generals who defeated Napoleon. Other Irishmen thrived in exile. Maria Theresa of Austria appointed Ulrich Maximilian Count Brown (b. Limerick 1705) as Generalissimo of all Austrian forces in 1752. In our own War for Independence, Marquis de Lafayette brought at least one Irish regiment, commanded by Lt. Col. Barthelemy Dillon (b. Ireland 1729). These troops were part of the force which defeated Lord Cornwallis at the Battle of Yorktown Heights.
Another of the Wild Geese gave his name to Jones Beach. Major Thomas Jones, who fought with King James at the Battle of the Boyne, received what is now Jones Beach as part of a grant from his father- in-law Thomas Townsend in 1696. Major Jones is buried in Grace Church graveyard on Merrick Road in Massapequa.
Although the Wild Geese left their native land to serve in foreign armies, they never forgot they were Irish. As Gaelic began to decline in Ireland, it survived as the language of the Irish brigades with orders, pass words, and the speech of officers being in Gaelic. For many of these soldiers their fondest dream was to return to Ireland with a large army to drive out the English invader. As an 18th century poet put it: The Wild Geese shall return
and we'll welcome them home
So active, so armed, so flighty a flock
was never known to this land to come
Since the days of Prince Fionn the Mighty.
Although the English have now departed from part of Ireland, the Wild Geese continue to fly. As Thomas O'Hanlon said in his book The Irish (1975): "The Irish are citizens of the world. When the time is propitious, they migrate with the natural instincts of wild geese, travelling ancient routes to Boston, London, Vancouver or Sydney." But wherever they travel, and no matter how long they have been away, whenever a few gather together, like Festus Conroy, the talk always turns to talk of home.

That even though now far away to Ireland they would swear

Unfortunately many exiles never returned, here are a few clips sent to me by Shelia Perino-Sapienza, New York USA, who is seeking answers to questions that only those that caused the exile can answer. Why is there such a lack of records on this side of the water. we all know that the PRO burned down but surely all our records weren't held there...were we that un-important that we didn't warrant recording???. Bit by bit and with every little help possible we will fill in the Penal years void and post famine Exodus and regain our Family History.

A glimpse of the life of a Rochfortbridge Exile

Many Irish found employment as Firemen or Cops. this Photo shows Sheilas Grandfather in the Firehouse, trying to "supplement his income" Pictured 3rd from left (smoking a dúgín) Joseph North from the High Park.

***
Joseph was a lovely poet and loved his mother dearly, he was so saddened by the loss of his mother that he wrote one of the most beautiful poems that I have ever read.
Before you read it - just think of what you might write on the death of your own mother.
take a moment

She sleeps the sleep of all that’s grand and great,

Full ripe in years, and to her God has turned,

Who to my infant lips my prayers has learned;

Before the throne angelic choirs sing,

They bear a soul all safe in God her King.

Triumphant borne before the throne of God,

Chastened by years of hard and honest toil,

There but remains thy casement ‘neath the sod;

Thy body pure that must be glorified,

Oh God! For this thy loving son hath died.

When youth was mine, I well remember now,

You watched beside the seething bed of pain,

With loving hand you smoothed the fevered brow,

And never once accepted proffered gain;

And when the time grew ripe for parting breath

You softly closed those tired eyes in death.

Oh! Were I now to number all thy deeds

For others done, by always willing hand,

How faithfully you followed him who leads,

And now before you looms the promised land;

Thy time has come, go forth for which you’re born,

In old Kilbride, where golden oaks and pine,

Their leaflets blend above the holy mound,

And ivied walls date back to Bridget’s time,

And Patrick blessed the sanctuary and ground;

And placed thee low beside thy kindred line.

And now the chimes of eve peal out the hour,

The call to prayer, our duty to our God,

I bare my head beneath the stately tower,

And kneel in supplication on the sod;

With crown of bliss, a halo round thy soul.

Letter to Mrs North from N.J Neary, Nashville, Tennessee, USA in reply to hearing of the death of Joseph North

Joseph North also wrote some cryptic poetry in his day and it might take a little understanding of the heart of the man before you can fully understand the meaning of his poetry, unlike the poem on the death of his mother, which has an almost musical ring to it and seem to be influenced by Welsh religious type gospel hymns, this next poem is only for those that know the history of Rochfortbridge to fully understand.

**********************************
Many families emigrated "en mass" and although many miles away from home they had the comfort of family and neighbours around them - the great Australian song "If we only had old Ireland over here" rang out in many a bar from Perth to Melbourne - pictured below are three North Sisters and their brother, all from the Parish of Rochfortbridge.
picture taken in 1938, not at a wedding or wake in Ireland but in Brisbane Australia.

Isaac North and Elizabeth Caffery (nee North) wife of Paddy Caffery Coachman, Gaulstown estate,
seated: Margaret McGrath (nee North) and Ann O'Neill (nee North) Ann was the wife of William O'Neill - son of Charles O'Neill and Catherine Gowran, The Park, Rochfortbridge. This Little gathering in Brisbane, 1938, was a typical gathering in far off lands - the Irish found refuge in USA, Australia, the Argentine, the West Indies, England and by choice as not before, Van Demons land - AKA New Zealand