With thanks to Rt. Hon John Browne 7th Lord Kilmaine, who has sent me loads of articles referring to "The Big House" and village life in the late 1800's early 1900's

Just ten years after the death of Robert Rochfort and the destruction of the Castle home that incarcerated The 1st Countess of Belvedere, the “New House” built to replace the original was on the market. The scars of the “Wicked Earl” were so hard to heal that even the 2nd Earl (George) could not continue to gaze at his birthplace and in 1784 the estate was bought by Sir John Browne, 7th Bt. Later to become 1st Lord Kilmaine.

Background to the Browne Family

John Browne, the first English man to settle in The Neale Co Mayo in 1580, was an accomplished sailor and explorer. He was granted land there by Elizabeth I for services rendered to the crown. The initial grant was thirty quarters where each quarter was 125 acres (3,750 acres in all), a very handsome grant by any standard. He became sheriff of Mayo in 1583, his seat and title passed to his son. The Browne family were styled Sheriff of Mayo and Baronet of the Neale for generations to come.

The Browne Family Tree in the peerage records. 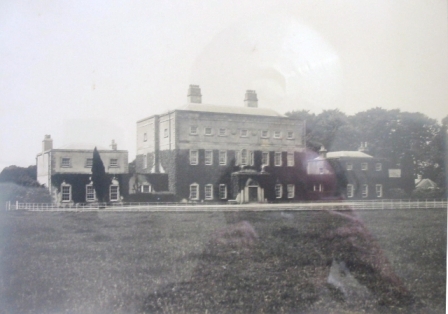 The Kilmaine Estate in Fartullagh - 1844

Listed as part of the total land holding of Lord Kilmaine is the land holding in the barony of Fartullagh.
the list, written in ink hand writing is as follows:
all that the Demesne of Gallston Park of Gaulstown consisting of the following subdenominationspart of Mahonstown, part of Ballynagall, part of Belfield, part of Beckstown or Beggstown, part of Gibbonstown and part of Gortumley or Gortumloe containing in the whole 1152 acres Irish Plantation Measure in the Barony of Fartullagh. - the schedule mentions lands held in Mayo and Athlone.

Your Lordships letter and cheque duly received.
I had a letter from Ryan this morning asking me to ask your Lordship for a "disscharge" for him. His address is Spittal St. Co Tipperary - He was a thorough good man only for his whims. Kynes pension was due on the 1st October, I think Mr. Rowan will pay the £1-10, but will let your Lordship know definitely next week. The O'Connells that want the "Pump Stick" are the farmers from the head of the Bridge Village - I do not know whether your Lordship has me shouting over their land or not. Coyne was 53 days, Bennett 37½ days - at the book presses, the amount paid £13-11-6. There are just 3 cows giving a little milk, there is one coming near the calving. I would have her sold only, if Mrs Browne is going to be at home, there would not be milk enough as the others are going dry fast. The next one that comes to the calving we will be able to sell if all goes well. Price has not paid the cash. Our mill went wrong about a fortnight ago and I sent for Price to see what was wrong so when he took part of the mill with him he promised so faithfully to pay it when he brought back the mill, which he has not done up until now 4 o'clock. I will go into Mr. Mooney on Monday and give him the whole particulars, they did not get many rabbits out of the "Oak Wood" nor did they loose any traps.
I am sorry to hear your Lordships health is not improving.

I am My Lord
Your Lordships obedient servant
Thos Little

Thomas Little was the head steward at Gaulstown, this letter was in response to a letter from Lord Kilmaine, as you read the letter you will find that Thomas answers each query without reference to the question. the hand written letter shows that Thomas had a good command of the art of letter writing and was pretty well educated. the only spelling mistake was the word "Disscharge" - but as a "disscharge" was a type of "gratuity" rather than a dismissal, that particular spelling of the word may have been used. the Kyne chap mentioned was Michael Kyne, once head gardner, now retired and on a pension of £1-10shillings a month (guess) as it was due in October. Little then mentions O'Connells interest in buying the Pump Stick - Lord Kilmaine obviously had reservations as to whom or what he was before the sale could go ahead. the next paragraph tells us exactly what the rate of pay in 1900 Gaulstown was, Coyne and Bennett were jointly paid £13-11-6, for a total of 90½ "man days", that equates to one shilling and sixpence per day if the cash was divided equally. after the cows were explained, Little "reports" Price for not paying whatever cash he was supposed to and gives us the time of day, one can almost see this letter being written, 4pm - Nov 3rd almost dark. I was glad to see the Oak Wood mentioned albeit that there was obviously poachers caught therein and Little was instructed to give the details to Mr Mooney, solicitor, Mullingar. and of course Little, as would any Irish man, commented on the health of his boss. - it was lovely to read such a letter and Thanks to Sir John Browne 7th Baron Kilmaine for sending it and much more to me.

Kilmaine - Landlords during the "Great Famine" - and beloved by all

The Kilmaine dynasty in Fartullagh began in 1784, This was a very welcome transfer of power as the Rochfort dynasty that preceded it was a cruel and callous one. The Lords Kilmaine were a much kinder, more compassionate folk as any historical record will show and as such the barony of Fartullagh over which they ruled the most part of was well spared the cruelty of the great famine. Of course people died in Fartullagh as they did anywhere in Ireland, of hunger and malnutrition but the gentry of this area were not as harsh as some of the more notable landlords in Ireland at that time. Lord Kilmaine was well liked as were the Cooper Family of Dunboden and the Smyth Family of Gaybrook. after all Lord Kilmaine was Irish. look back on his family tree and see for yourself. his fore fathers settled in Mayo in 1580.
there are many great stories told over a few pints of granny Cully beating 5th Lord Kilmaine (JED) in a race at the Park sports and I have also in my possession a list of tenants that contributed to the presents to be purchased for the coming of age of the same J.E.D. Lord Kilmaine. it was very interesting to see a full list of tenants. Listed below is the letter that accompanied the request to contribute towards the 21st Birthday celebrations of John Edward Dean Browns later 5th Baron Kilmaine. dated 1899
The Honourable Mr Browne having now attained the age of 21 years. it is very customary throught the country - giving a nice present on such an occassion, therefore, we the employees on the Gaulston Estate would wish the tenants on the estate to co-operate with us in raising a sufficient sum of money to buy a suitable "present" to be given to Mr. Browne on his return home. It would show that you as tenants, and we as employees highly appreciate the good feeling that has always existed between all on the estate of Kilmaine.
List of Tenants B. Daly - Thomas Little - Michael Kyne - Peter Coyne - Patk Caffery - Margaret Farrelly - Lizzie McKay - Nicholas Curran - Michael Rowan - Andy Carty - Pat Crosbie - Jas Scally - J. Whelehan - J. Shiel - Matt Galagher - Andy McKeown - John Carroon - M. Corroon - Matt Hope - Jas Crosbie - Hugh Corrcoran - Ed Garland - Thos Curran - Pat Keogh - Pat North - James Lyster - Denis O'Neill (name sounds familiar) - Christopher Joyce - Tom Kyne - Peter Logan - Patk Ward - Patk Keogh - Patk Flanagan - Peter Keogh - Pat Dalton - Thos Curran - James Hughes - Bernard Conlon - James Simmons - Thos Keogh - Mrs Johnston - John Leavy - James Fox (Gaybrook) - M. Lynam (Enniscoffey) - Pat Early (Milltown) - Barry Keogh (Rahanine) - Thos Gilsonan (Gortumbloe) - John Looram - Martin Gallagher - Jas Corrigan - Jas Flood (Blacksmith) - Thos Hury (harness maker) - Mrs Bennett - Mrs Oulahan - Miss Cusack - Mary Sheerin (Lodgegate) and Thos Conlan (Derry)

Lord Kilmaine received very detailed technical instructions from William Talbot, anyone in the building or DIY trade will find the specification interesting. The original "site" for the house was "Coackleys Walled Garden" but for some reason it was moved to the entrance of the "Deer Park" the house stands in ruin today but the measurements and specification were carried out to the latter:
Here are just some of the details from a three page list of instructions.

Excavate> the soil from the foundations to the hard subsoil and lay a footing two feet thick up to the ground level on which a damp course composed of well boiled tar and sand shall be laid;
Superstructure>38 feet long by 17 feet wide, 13 feet to the eve.
Mortar> all stone and brick shall be set in mortar composed of one part freshly burned lime to three parts clean sharp sand, properly cured and tempered.
Slates> The roof shall be covered with best blue Bangor slates 24 X 14 and have 4" cover, fastened with zinc nails.
the list of instructions details every aspect of the building from excavation to painting of the finished house. the last article on the list should be written into building contracts today. it states:-
The Contractor shall clear away all the rubbish from about the building, shall supply and provide all materials and labour and finish the work in a tradesman like manner and be subject to the inspection of Lord Kilmaine or his architect. Add 5 per cent for contingencies - signed William Talbot.
(any one that wishes to see the full three page list, I can e-mail it)

more accounts of Gaulstown in the Kilmaine Reign

IF YOU HAVE ANY